This came to me as an issue when I started migrating one project from SharePoint 2010 to SharePoint 2013. The code uses LINQ to SharePoint and it was not written in a clever way. We decide to use CAML queries and optimize the code.

The scenario: Create gridview that gathers information from three(or more) lists.
The problem: How to create the CAML query joins and projected fields correctly.

Option 1: Get generated CAML query from LINQ to SharePoint code
This doesn’t work. I wrote the LINQ to SharePoint code connected the three lists. When I executed the code the following error was thrown – “The query uses unsupported elements, such as references to more than one list, or the projection of a complete entity by using EntityRef/EntitySet.” Here is some explanation about it and why this can’t be used.

Option 2: Write the query yourself
I found this article in MSDN. Read it !
The second part in it is exactly my scenario. But it takes me a lot of time to understand how exactly to write this in server-side code. So here is a working code of the described scenario: 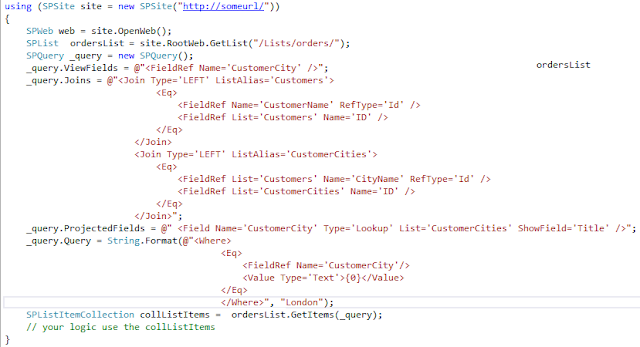 And yes, this works but what if we want to get more columns. Here is same scenario but more complicated.

I have added new colums and added new projected fields in the query.
The following code get all the additional data: 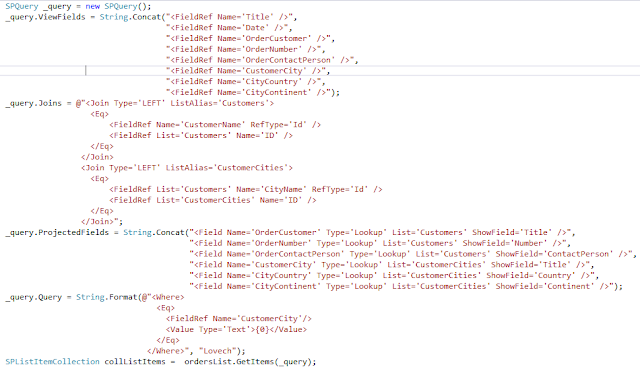 
1. Only the Order’s list columns can be used with their real internal names.
2. The other columns are all projected and there are limitaton of the column's type. For example the 'Contact Person' column in my scenario can't be a Lookup or Person and Group.
3. The type of the projected field is always ‘Lookup’
4. ShowField is the value of the internal names of the fields
5. The ListAlias and List in the Join statement are not the real names(or Urls) of the list. The next Join statement is equal to the above one:

Popular posts from this blog

February 01, 2013
Start using SharePoint 2013 I noticed that the way for selecting people or groups is changed. The new way is simple – just ‘Enter name or email address’ without any icons for ‘Check Names’ or ‘Browse’. I guess that the PeoplePicker is changed but NO. PeoplePicker sitll has the same functionality as before. There is a new control called ClientPeoplePicker . How to use it: 1. Add this references <% @ Register TagPrefix ="wssawc" Namespace ="Microsoft.SharePoint.WebControls" Assembly ="Microsoft.SharePoint, Version=15.0.0.0, Culture=neutral, PublicKeyToken=71e9bce111e9429c" %> 2. Add the following control declaration       < wssawc : ClientPeoplePicker          Required ="true"          ValidationEnabled ="true"          ID ="peoplePicker"          runat ="server"          InitialHelpText =" <% $Resources:wss,aclinv_PickerIntialHelperText %> "          VisibleSu
14 comments
Read more

February 04, 2013
The scenario:  Create custom forms for Add/Edit/Delete items to a list which is not accessible by the regular users. The forms should support working with attachments. The problem: The default SharePoint controls don’t work if the current user doesn’t have access to the list items. The solution: Use custom code for generating the SharePoint default HTML so the out-of-the-box javascript works correct. Explanations:  The scenario occurs when some list need to be hidden form the users. The list has broken security inheritance and users can't navigate directly to it. Working with its fields requires crating web warts or application pages with appropriate controls on them and server-side code running under elevated privileges. The issue here is that the OOTB (out-of-the-box) controls for Attachments don't work if the user doesn’t have access to the related list item. The OOTB controls are: AttachmentsField , AttachmentUpload , AttachmentButton . There is a lot of code
1 comment
Read more

The column name that you entered is already in use or reserved. Choose another name.

September 16, 2016
The problem:  You want to create column with a specific name in SharePoint but SharePoint gives you the message "The column name that you entered is already in use or reserved. Choose another name." Why this is a problem? Because you need to create custom columns and content types using the default SharePoint interface. And the business users have to see properly named columns - for example "Description", not "My Description". Solution: It is important to know something technical about SharePoint (versions Office 365, 2013, 2010):  - it supports columns with same Display Names.  - you can’t have columns with same Internal names Let’s implement the following common scenario: You are creating a SharePoint customization and you need the following column:    Type: Multiple lines of text    Internal Name: MyProjectDescription    Display Name: Description  Here is the correct way to achieve it: 1. Create the column MyProjectDescription. T
Post a comment
Read more